Traveling Thru The Bible Show

When you tour with Maranatha Tours, we take you to Yardenit, also known as the Yardenit Baptismal Site which is frequented by Christian pilgrims. This is the well-known baptism site located along the Jordan River in the Galilee region of northern Israel. The baptism of Jesus (Matthew, 3:13-17) actually took place in Qasr el Yahud, north of the Dead Sea and east of Jericho. For centuries, Qasr al Yahud was the most important baptism site for pilgrims, and monasteries and guest houses were established near it. After the Six-Day War Qasr el Yahud became a frontier area, located on the border between the state of Israel and Jordan. As a result, the Israeli Ministry of Tourism decided to establish this site in 1981 as a replacement site. As a result, “Yardenit” became the only regulated baptism site on the Israeli side of the river, until the reopening of Qasr el Yahud site in 2011.

Check out this episode and don’t forget to SUBSCRIBE TO OUR SHOWS. 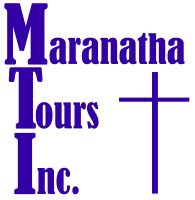 Here is this weeks BIRTHDAY SHOUT OUTS! From our Maranatha Tours Family to YOU! CLICK HERE!

Don’t forget to download our NEW APP HERE! For the iPad or iPhone your going to use it in the states and when traveling. 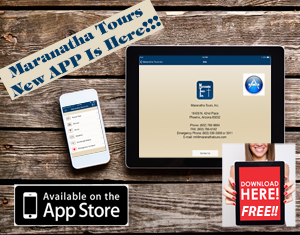 Want some really Good and Easy recipes? Check out Chef Reilly as we find some great recipes and cook thru the Bible. www.cookingthruthelandsofthebible.com

The most important decision you will make regarding a Spiritual tour is choosing the company that will arrange the tour for you. You are responsible to and for your people and must be sure they receive the best tour for their dollars spent. We present to you Maranatha Tours, Inc., and suggest you compare other companies to Maranatha before making a commitment.

Maranatha Tours specializes in Christian tours that visit places of the Bible or history that has developed our knowledge of the Bible and believes it is a ministry as well as a business. We have established a record of service and growth unique in this very competitive market.

TIP OF THE WEEK: Documents to bring on tour! Click here to see the video
DOCUMENTS TO BRING ON TOUR: Going on Tour? Don’t know what you can’t forget? Jennifer Reilly from Maranatha Tours explains what we need to bring with us before we get to the airport.